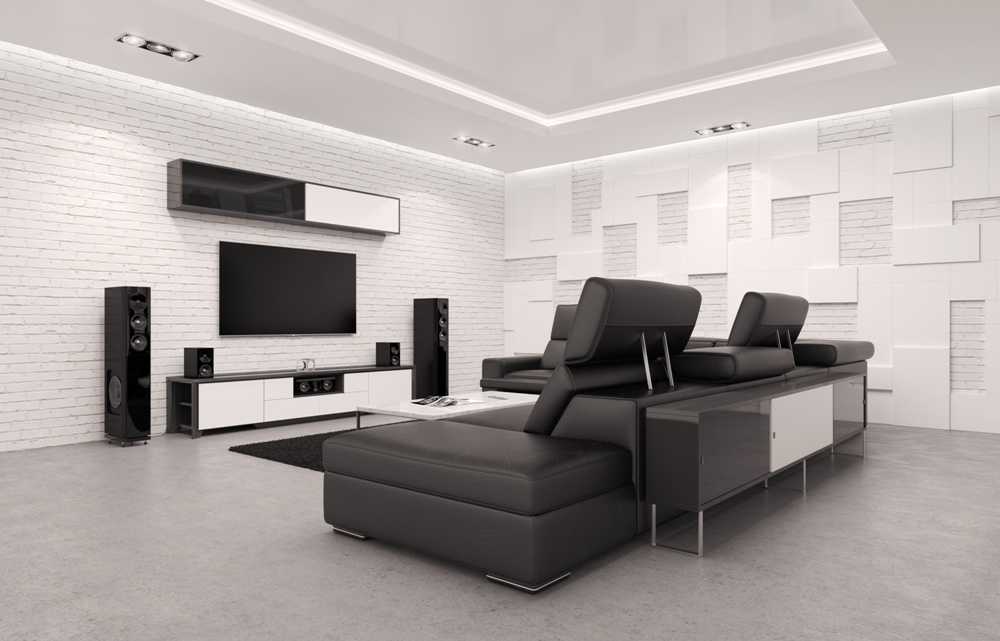 As the summer storms approach and the rain falls outside of our windows, the more our minds begin to drift into home renovation land. Yes, even as adults, we still tend to look out the window and dream, only now we are dreaming of constructing the most amazing basement movie theater we could ever imagine.

A lot of this has to do with the fact that we are probably standing inside our ragged basement. A basement now partially covered with 1970’s carpet rugs, an old sofa that used to belong to grandma, so you can’t throw it away, and a coffee table with three legs that your spouse thinks your fixing.

As a reminder, you are never going to fix that coffee table; your spouse is living the dream of thinking you will, though.

Entertainment and movie rooms in basements make for a perfect solution to resolving the old matter of wasted space. Basements are often large in scale, but often, through no fault of their own, become the underbelly of the home’s life. Basements are ripe with space and often tend to regulate temperature better than other spots in the home.

Entertainment rooms should be both sizeable enough to fit guest and temperate enough to not force those guests to strip down to their underwear while watching the first Rambo at your summer movie party. Basement movie theaters can be more than just a dream; they can be a logical home enhancement that upgrades more than just your home, but also your social life.

Advantages of a Basement Theatre

Kids Love Basement Entertainment (So do Mom and Dad)

Basement entertainment rooms offer kids a place where they can seclude themselves with other friends yet remain in the safety that home offers.

Your Home Will Add Value

If you are ever to put your home on the market, the small investment that you made in your home’s basement upgrade could pay you back several times over.  According to Nationwide Insurance, a finished basement could result in an 83% return on the initial investment.

The addition of a basement entertainment room adds vital square footage to your home, which by default, can increase the value of your home. When it comes to property value, size and space are two undeniable factors that move the sale price needle. Many basements are nearly a replication in the kitchen, living room, and dining room’s spacing, which amounts to a substantial increase in square footage.

If you have a teenager, you probably have to knock on their door more times than you enjoy and tell them to “turn it down.” When you have younger kids, television noise created from watching a movie in your living room could awaken them.

In many cases, a basement movie theater can serve to dull down speaker noises and consolidate it to the basement region of the home. Basements have mother earth protecting on at least three sides, which helps to trap sound.

So Why Are You Wasting That Space?

Whether you choose to upgrade your basement yourself or have a professional tackle your basement movie theater build, it isn’t difficult to turn a dilapidated eyesore into a world of fantasy, science-fiction, and maybe even romance (think, The Notebook).

Basement entertainment rooms can increase the value of your home, which by default, is a return on the initial basement remodeling investment. Wasted space in your home detracts both value and function from the home which is why it is imperative to resolve.